MacIntyre Family Funeral Home has proudly served The Town of Erin and area for over 50 years.

The Funeral Home has been family owned and operated since June 1959. Today, as always, it is our goal to provide a wide range of options to meet your family's needs. We take the time to listen to your wishes, and can customize any service to your preferences.

Our priority is to ensure that every loved one's life is celebrated and remembered in a manner that satisfies the wishes of the families we are privileged to serve.

In June 1959, Dave and Betty Butcher began the legacy that is Butcher Family Funeral Home on Main Street, Hillsburgh. Dave had worked at Turner and Porter and Newbigging Funeral Homes in Toronto; Chatterson-Long Funeral Home in Collingwood and Gamble Funeral Home in Shelburne. He was licensed in 1953 and has been honored with Emeritis Status for over fifty years of service by the Board of Funeral Services, Ontario. In 1980, Dave purchased the former Weddell Funeral Home on Main Street, Erin, and in 1981, his son Blair joined the staff. Dave passed away on September 21, 2009 after a valiant struggle with cancer. Betty is living in Guelph.

Blair obtained his Funeral Director's license in 1984, and worked alongside his father and Marvin McDougall, owner of Butcher Furniture in Hillsburgh. In 1985 the building on our present location was completed at 5399 Main Street South Erin. Blair purchased the business from his father in 1990, and with his wife Jeannie raised their daughter and son on the property. Jeannie lost her battle with cancer in 2006. We are pleased to announce that Blair's daughter Shannon has completed her schooling at Humber College.

On August 12, 2016 the funeral home was purchased by Andy and Amy MacIntyre. Andy and Amy have two children (Madison and Sam) and are very excited to call Erin home. We look forward to meeting the community in the coming months and adjusting to our new surroundings.

A year of daily grief support

Our support in your time of need does not end after the funeral services.  Enter your email below to receive a grief support message from us each day for a year.  You can unsubscribe at any time. 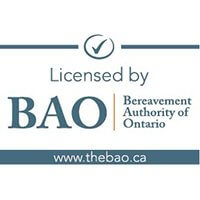